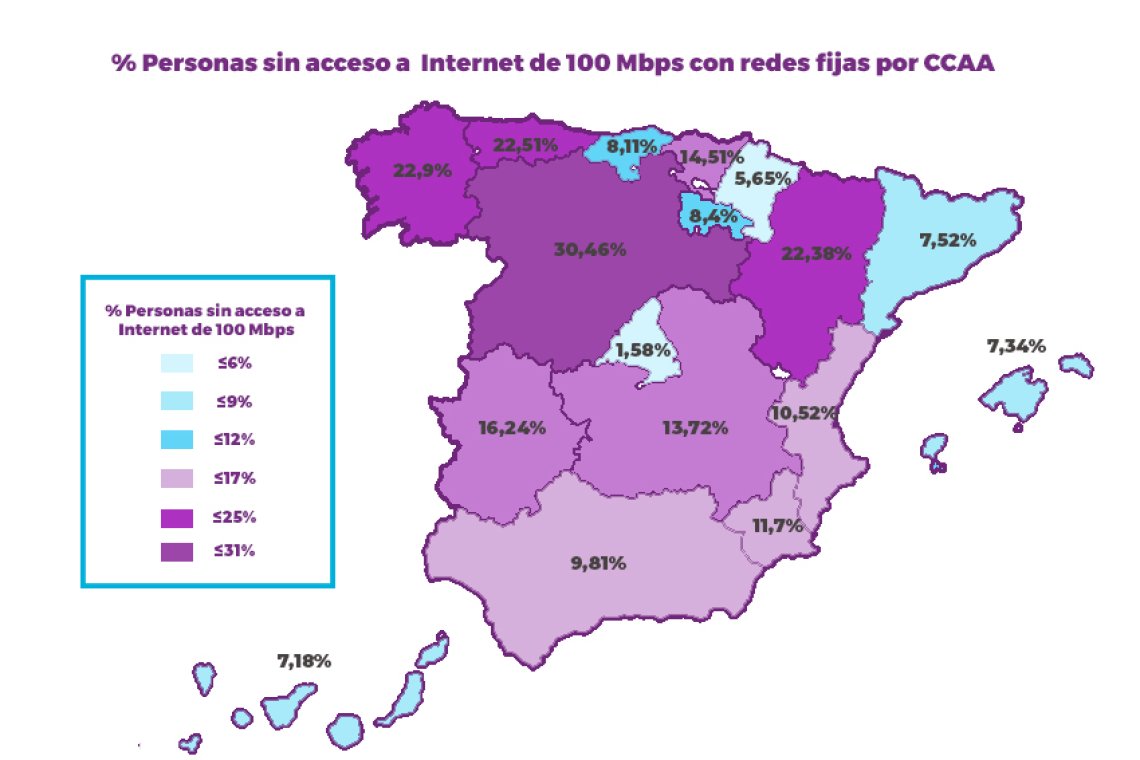 The autonomous communities of Aragón, Asturias, Castilla y León and Galicia are the most affected by the digital disconnection
The digital divide between rural and urban areas has narrowed to 20 percentage points, five of which have been reduced in the last year

A total of 2.4 million Spaniards living in rural areas still do not have Internet access of at least 100 Mbps through fixed networks, according to data from the latest Broadband Report for 2021, published by the Ministry of Economic Affairs and Digital Transformation and collected by Eurona, the expert company in connectivity services and solutions for rural and remote areas.

The autonomous communities where this digital divide is still deepest are Aragón, with 22.3%, Asturias, with 22.5%, Castilla y León, with 30.4% and Galicia, with 23%, with villages of less than 500 inhabitants being the most affected.

The report, which analyses 5G coverage for the first time, shows that it has gone from 0% to 26.1% in 2021 in rural Spain. The government says that future mobile network coverage challenges will focus precisely on improving 4G coverage and accelerating the rollout of 5G in both urban and rural areas.

Although these data on the reduction of the digital divide reflect significant progress in the penetration of coverage in rural Spain, Eurona stresses that it is still far from meeting the objectives set by the European Union in digital connectivity, which aim to ensure coverage of at least 100 Mbps to 100% of the population in any part of the territory in 2025.

For this reason, the company recalls the viability and immediacy of technologies such as satellite to bring broadband connection to any place. Eurona was the first Spanish company to bring 100 megabit connectivity to 100% of the population and the only one capable of doing so at national level, providing this essential service to rural, isolated and remote areas where other technologies do not reach, guaranteeing equal opportunities between rural and urban dwellers.

According to Eurona's CEO, Fernando Ojeda, "reality shows us that there is still a lot of work to be done to provide rural areas with the quality digital connection they demand and that this is key to boost their development, so we must remember that satellite is the only technology that solves this problem in a viable and immediate way".