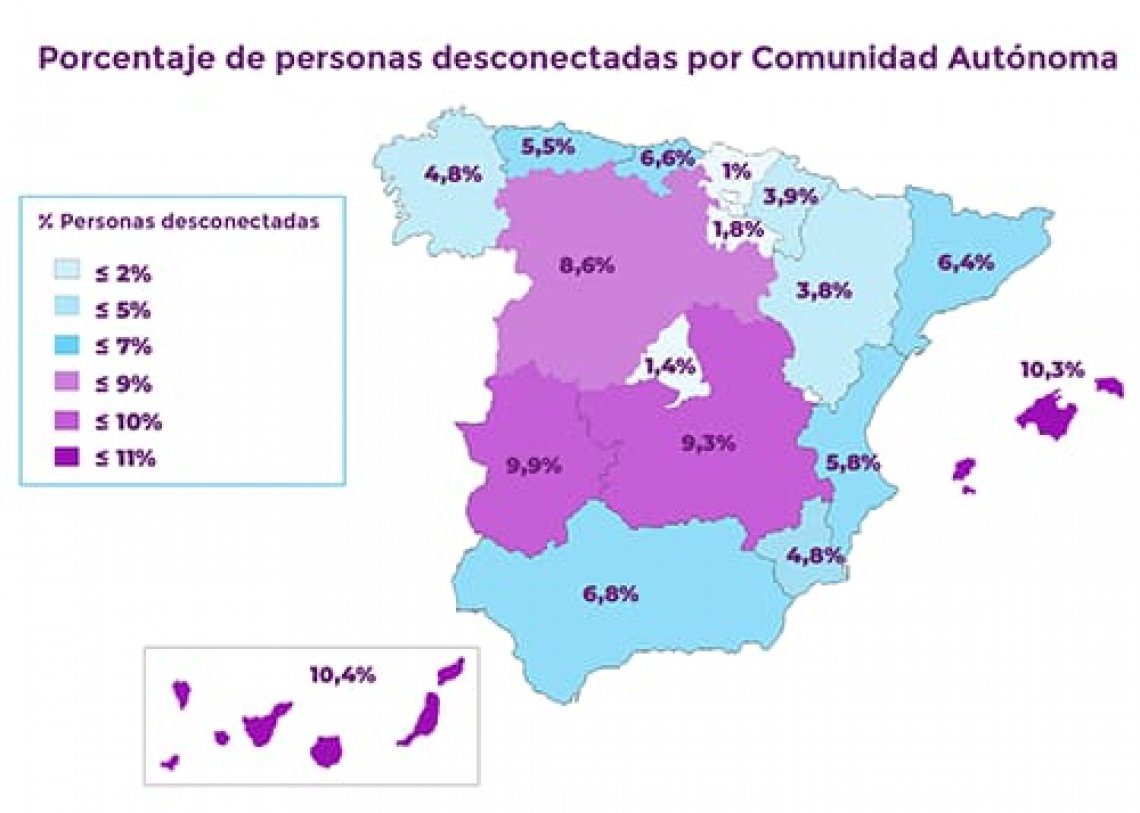 The Canary Islands, the Balearic Islands and Extremadura are the communities most affected by the digital divide

13.4% of rural areas in Spain do not have access to Internet with at least 30 Mbps speed through terrestrial networks, according to data from the latest Broadband Coverage Report published by the Ministry of Economic Affairs and Digital Transformation collected by Eurona, which is strongly committed to satellite as a way of democratising quality connection in these places.

This data, although it reflects a significant advance in coverage penetration in rural Spain, does not meet the state objective of connecting 90% of citizens in these areas to broadband Internet before 1 January 2020. Furthermore, this situation is worsened for 1.82 million households that can barely access an ADSL connection at 2 Mbps speed, according to the same study.

At national level, the digital divide is also shrinking considerably, although 5.72% of the population, that is almost 3 million citizens, still do not have access to 30 Mbps Internet. In this respect, the Canary Islands, where 10.4% of their inhabitants still do not have access to broadband, the Balearic Islands (10.27%) and Extremadura (9.92%) are the regions most affected.

These figures are even more important in the context of the current health crisis, where the Internet is more important than ever and is also an opportunity for Empty Spain to attract new inhabitants, guaranteeing such essential activities as work, distance learning, remote assistance and online leisure and entertainment during these months.

The satellite, another available alternative

Thus, although the deployment of broadband access infrastructures in Spain has been and is one of the main political and strategic objectives, in line with the premises set by the European Union and the majority of OECD countries, Eurona insists on the importance of communicating other available alternatives for tackling the digital divide in rural areas and requests that a small part of European recovery funds also be dedicated to this end through direct aid to the end user.

Thus, taking into account the difficulties presented by terrestrial technologies such as fibre to reach the whole territory in the short term, the telecoms company recalls the feasibility and immediacy of others such as satellite to bring broadband connection anywhere.

According to Fernando Ojeda, CEO of Eurona, "despite the efforts, we see an unpredictable situation as the COVID has fully affected rural areas, as many of them did not have Internet as an ally to maintain their activity in remote areas. Faced with this situation of vulnerability, aid is needed to help reverse the situation and technologies such as satellite to solve the obvious problem of disconnection in the villages immediately".