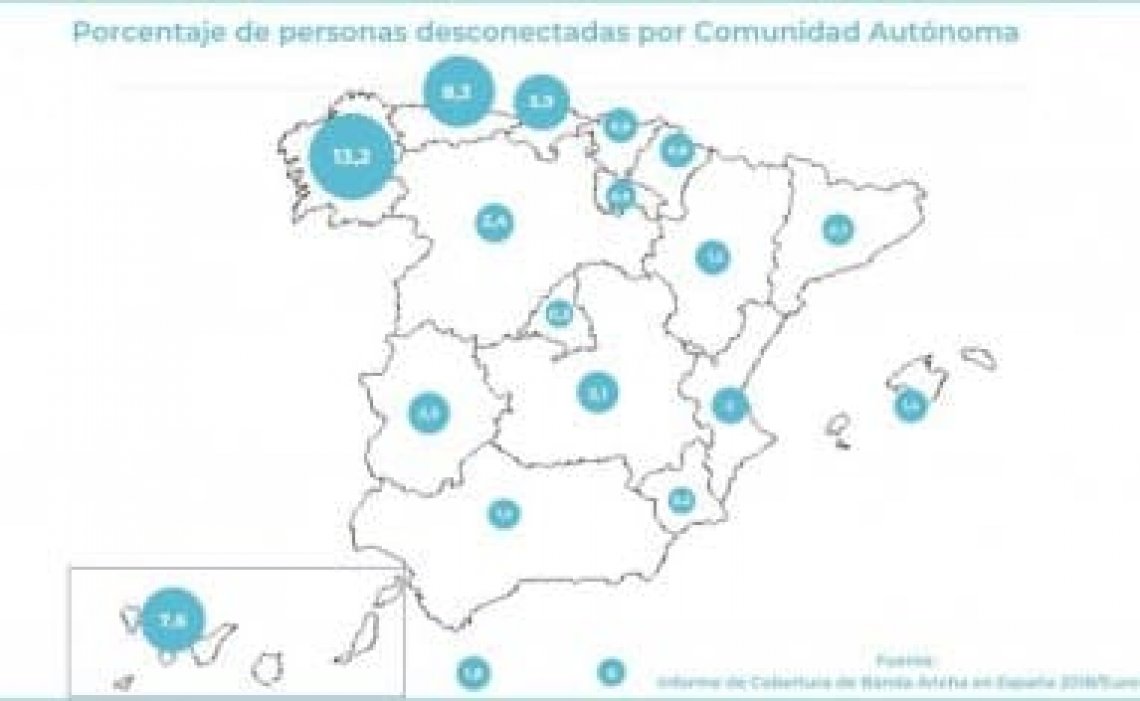 Rural areas, unpopulated or difficult orography remain the most affected by disconnection, especially in Galicia, Asturias or the Canary Islands

The recent report of the Ministry of Economy and Business does not analyze the coverage of satellite networks, an immediate and viable alternative to bring Internet to rural areas

Madrid, July 15th, 2019. 7% of the population, more than 3.2 million inhabitants, has a poor Internet connection with a speed of less than 10 Mbps. A problem that is reduced by 2% compared to the previous year's data, but which continues to affect rural, uninhabited or difficult orography areas, according to Eurona data from the Broadband Coverage Report 2018 recently published by the Ministry of Economy and Business that analyzes all terrestrial networks.

The situation is even more serious for about 1 million people, whose speed barely reaches 2 Mpbs. Galicia, Asturias or the Canary Islands or the most affected communities. In fact, 13.2% of Galicians, 8.3% of Asturians and 7.6% of Canarians have a slow or very limited connection.

On the other hand, communities such as Murcia, Madrid or La Rioja reduce their disconnection percentages to below 1%, according to data from this report which shows that broadband is restricted in rural areas, as coverage is reduced to higher speed levels.

Although it is true that the penetration of fibre optics - the main technology in cities with more than 50,000 inhabitants - is up six points on the previous year, the implementation of the rest of terrestrial technologies remains; bad news for small municipalities that still do not increase their possibilities of Internet access.

At least in theory, since the report does not contemplate the coverage of satellite networks, an immediate and viable solution to bring broadband connection to rural nuclei and that in the last year has positioned itself strongly as an alternative to fiber. Unlike fibre and other technologies that are characterised by a high level of deployment that is often unprofitable in these areas, the satellite's capacity to cover the entire territory allows high-speed Internet to be carried anywhere, wherever it is.

Furthermore, this is supported by the Red.es satellite aid for municipalities of 5,000 inhabitants, which allows for free registration and installation of equipment, making it possible in a matter of days for the inhabitants and tourists of these villages to connect to the Internet, with the possibilities that this offers against such a pressing phenomenon as depopulation.

Precisely, it will be the disconnection or the scarce coverage of Internet the main obstacle that will find the thousands of holidaymakers who travel these days to the villages coinciding with the holidays. Bearing in mind that nearly 5,000 Spanish municipalities are at risk of extinction, Eurona recalls that rural tourism is an economic dynamiser that does not understand the experience of travelling without being connected, especially during long stays such as summer holidays.

According to Fernando Ojeda, CEO of Eurona, "the current broadband coverage report highlights the shortcomings of the rural world in terms of a quality Internet connection, an essential part of our lives and a human right recognised by the UN in 2011. To make it possible and multiply the opportunities of these areas, often unpopulated, the satellite is a real and widespread alternative, although the study does not yet dedicate a separate analysis.