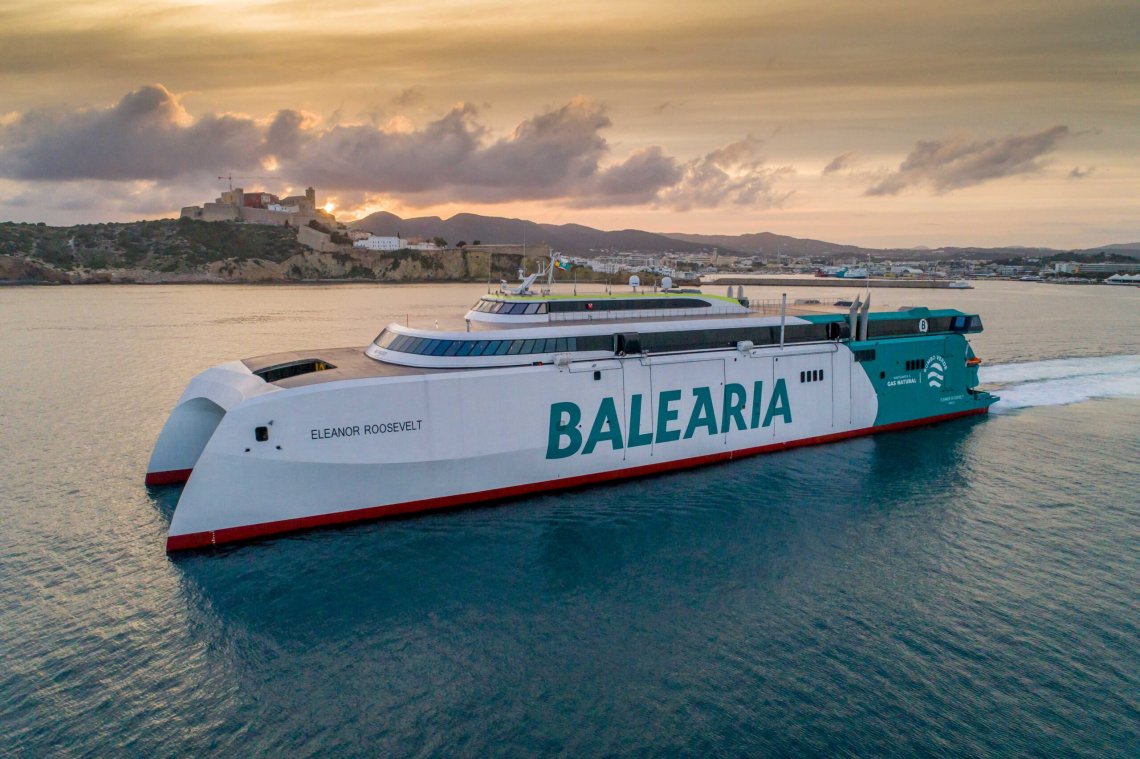 The 'fast ferry Eleanor Roosevelt', with a capacity for 1,200 passengers, has digital boarding services and remote surveillance of pets, among others

Eurona, the Spanish telecommunications multinational expert in on-board connectivity solutions and services, has extended its alliance with the shipping company Baleària to offer Ka-band satellite Internet connection to the company's ninth smart ship, the Eleanor Roosevelt, a sustainable flagship of the company as the first fast ferry in the world to be powered by natural gas.

Eurona has deployed its expertise in mobility connectivity and has made available to this new Baleària vessel the satellite Ka-band, an innovative range of frequencies used in satellite communications that offers a high quality of connection, capable of bringing Internet continuously and without incident to places without terrestrial telecommunications infrastructures.

In addition, the relevant cybersecurity measures have been incorporated to guarantee the protection of the digital services provided to the crew and passengers of this fast ferry, thus improving their travel experience from start to finish.

It is precisely this 'costumer experience' philosophy that has led Baleària to incorporate new digital services on board in recent years that Eurona and its Ka-band technology have made possible. This is the case of digital boarding via QR codes, mobile phone payments or the live video surveillance system for pets via mobile phone.

With the connection of this new fast ferry, Eurona expands its LAN and Wifi deployment and operation services in the Mediterranean and the Atlantic, counting more than twenty connected ships of Baleària from a fleet of 29 ships in 6 countries.

Moreover, with this new operation, the company also strengthens its strategic B2B business area in the maritime sector, a niche in which it already connects with satellite technology in addition to passenger ferries, merchant ships, yachts, fishing boats and even rescue vessels.

The relationship between Eurona and Baleària dates back to early 2017, when it connected the shipping company's first vessels. Since then, and until now, the 'teleco' has improved and expanded its value proposition, adapting to the innovation of the satellite market and the new digital needs that optimise the user experience and provide a competitive advantage for the shipping company.

According to Fernando Ojeda, CEO of Eurona, "with this latest generation technology we are responding to one of the main problems of providing these services at sea: their high cost and limited bandwidth. With a capacity of up to 1,200 passengers in the case of this ship, enabling unrestricted Internet access to digital streaming content was a challenge but also a major breakthrough".

Global Satellite Technologies is the subsidiary of the Eurona group, an expert in connectivity solutions and services with more than 15 years of experience. It has a network of 150 professionals and more than 40,000 customers in Europe, Africa and Latin America to whom it offers connectivity with global reach, whether in remote areas, public spaces, urban areas, land, sea or even air. It is currently backed by its main shareholder, the US fund Magnetar Capital, and is one of the top ten telecommunications operators in Spain with a turnover of more than 30 million euros. For more information: www.eurona.es

Baleària is an expert in the transport of passengers, vehicles and goods on connections with the Balearic Islands, as well as being the only shipping company with inter-island routes on the four islands of the archipelago. The company also operates in the autonomous cities of Ceuta and Melilla, and links the Canary Islands with the mainland. Internationally, it offers services in North Africa and connects the United States with the Bahamas. The Baleària group has a stable workforce of more than 1,500 people, who work in the 6 countries where it operates and on its 29 ships.

Baleària's commitment to clean energies responds to criteria of social responsibility and economic profitability. Thus, the shipping company, which is a pioneer in the use of natural gas, is working to achieve the goal of zero emissions through renewable energy projects, such as hydrogen and renewable gas. The shipping company has invested 380 million euros in a fleet of nine natural gas ferries, a fuel that reduces atmospheric emissions. Baleària defines itself as a responsible corporate citizen, which is involved in the social and economic development of the territories it connects and in the welfare of their inhabitants.