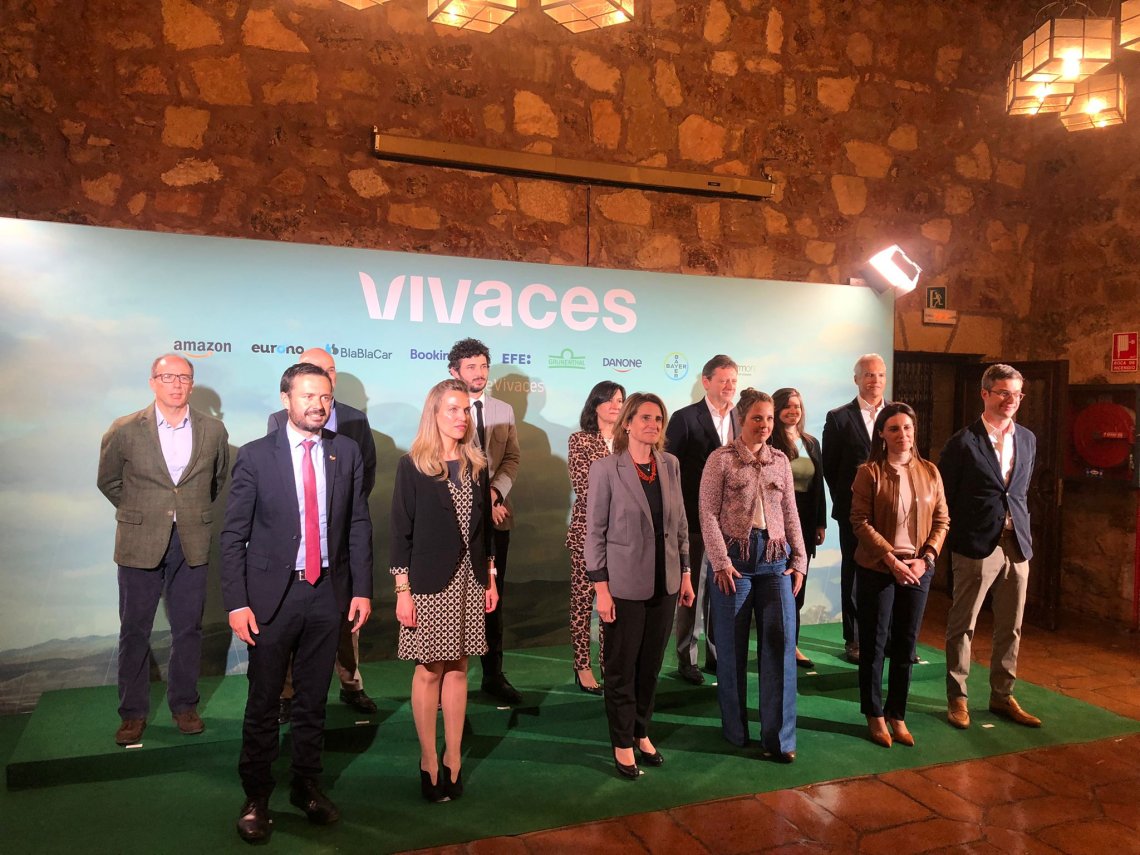 Vivaces is born as an alliance formed by private entities with the common objective of highlighting the potential of the rural environment, as well as contributing to the structuring of the territory and equal opportunities for all citizens

Eurona, Amazon, Bayer, BlaBlaCar, Booking.com, Danone, Grünenthal and Harmon are joining forces for the countryside and are contributing the best practices of the dynamisation projects with which they collaborate. Agencia EFE will be media partner of the initiative

The presentation of the initiative was attended by the Third Vice-President and Minister for Ecological Transition and the Demographic Challenge, Teresa Ribera, the Minister for Sustainable Development of the Regional Government of Castilla-La Mancha, José Luis Escudero; the Government Delegate in Castilla-La Mancha, Francisco Tierraseca Galdón; and the Mayor of Sigüenza, María Jesús Merino, among other authorities

At the end of the event, the companies that make up Vivaces signed a founding manifesto that lays the foundations for joint work, open to the incorporation of new members

Nine companies - Eurona Amazon, Bayer, BlaBlaCar, Booking.com, Danone, Grünenthal, Harmon, and the EFE Agency - have presented this Friday a business alliance that aims to value the potential of the rural environment, as well as contribute to the structuring of the territory and equal opportunities for all citizens.

The Vivaces presentation event, which took place at the Parador de Sigüenza, was presented by the journalist Marta Fernández, opened by the Third Vice-President and Minister for Ecological Transition and the Demographic Challenge, Teresa Ribera, and closed by the Minister for Sustainable Development of the Government of Castilla - La Mancha, José Luis Escudero. The mayoress of Sigüenza, María Jesús Merino, also took part in the event, which was also attended by the Government Delegate in Castilla - La Mancha, Francisco Tierraseca.

During the first part of the presentation ceremony, the president of Vivaces, Mireia Prieto, head of Booking.com for Southwest Europe, Middle East and Africa, and the director of strategy of Agencia EFE -media partner of the project- Soledad Álvarez, explained the main axes of the joint work that the companies will develop through the alliance, which has been embodied in an agreement of intentions signed by the nine entities during the event.

Vivaces is born with three fundamental lines of work. Firstly, the generation of knowledge about the potential of the rural environment; secondly, the generation of synergies and shared spaces with social innovation initiatives that are developed in rural areas; and thirdly, the dissemination and visibility of the importance of territorial cohesion.

"Vivaces aims to bring together the work that the different entities are developing separately, and to collaborate, in turn, with those who, from public institutions or from the different social innovation initiatives, are developing projects that value the potential of the rural environment", explained the president of the alliance.

For her part, Soledad Álvarez stressed the need to mobilise public and private resources to reinforce territorial cohesion, highlighting the work of information structuring that the agency has been carrying out for more than 75 years.

The role of business in promoting territorial cohesion

In the second part of the event, the participants discussed the role played by the business sector with specific good practice initiatives in this field.

Thus, eight innovative projects were presented, most of them developed by entrepreneurs from different rural areas of our country, which have been supported in one way or another by the founding entities of Vivaces.

In the first colloquium, 'The potential of the rural environment to improve health and sustainability', the following projects were presented: sustainable transport (BlaBlaCar), environmental health (Bayer), generational change (Danone) and medical care (Grünenthal).

During the presentation event, the nine founding members of the alliance called on other companies that are already working on initiatives to promote the rural environment or the structuring of the territory to join Vivaces and make this initiative an influential and benchmark project in this field.

They have also announced the launch of the website www.vivaces.org where companies, institutions and citizens can gradually discover the potential it offers through its content on the various projects promoted by companies, new initiatives and meetings that will take place within Vivaces.

According to Fernando Ojeda, CEO of Eurona, "the digital divide affects 21.7% of the rural population. That is, millions of people living in municipalities of less than 5,000 inhabitants do not have access to the Internet, according to data from Eurona's pioneering report on Internet consumption habits in rural Spain. Therefore, the arrival of a high-speed broadband Internet connection in rural areas represents an opportunity to digitise sectors such as tourism, local businesses, agriculture and livestock, the main economic activities that guarantee the survival of rural areas, creating jobs and helping to fix the population in the territory, as well as attracting digital nomads and young people with an entrepreneurial spirit who wish to develop innovative projects in rural areas or telework from these areas".