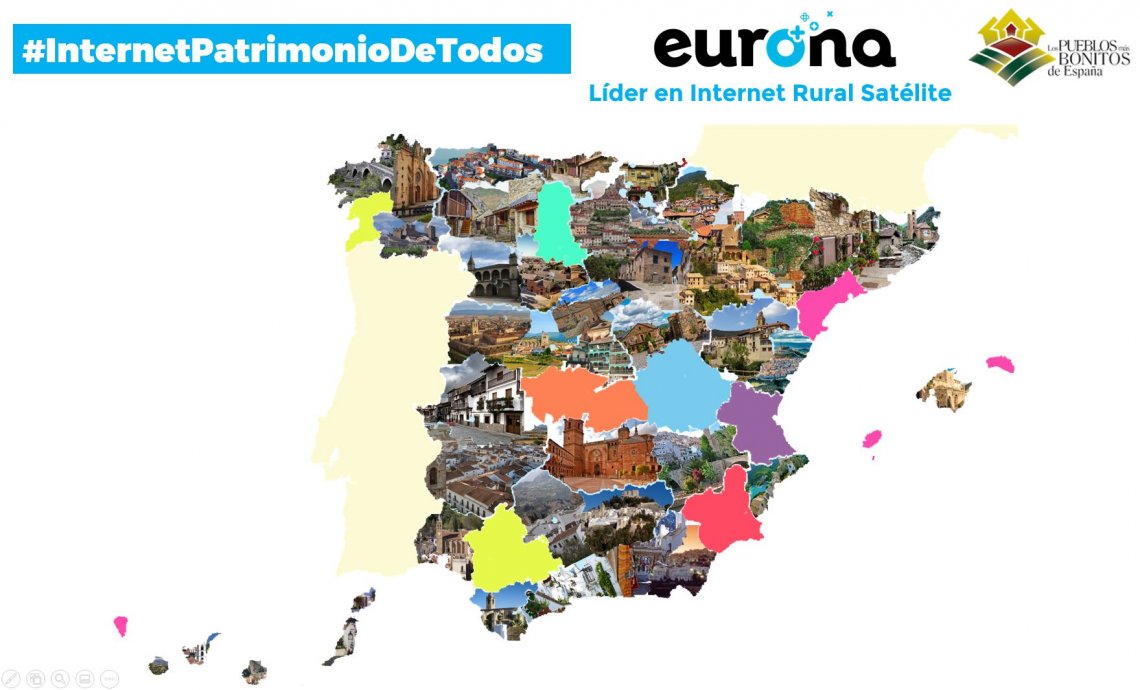 This initiative shows Eurona's ability to anticipate the objectives of the Digital Spain 2025 agenda, offering 100 Mbps satellite Internet in a viable and immediate way to the whole territory

Eurona, the Spanish telecommunications multinational leader in bridging the digital divide in rural areas by offering high-speed satellite Internet services, will bring ultrafast broadband Internet to the most beautiful villages in Spain through the 'Internet Patrimonio de Todos' contest.

The company has teamed up with the Association 'Los Pueblos Más Bonitos de España', made up of the 104 most beautiful towns in our country, to promote the charm of their heritage, landscapes, traditions, culture and history by providing them with a quality Internet connection.

At present, nearly 3 million people - 5.72% of the population - still do not have access to a quality Internet connection, a problem that particularly affects rural, unpopulated areas or those with difficult terrain. This is why Eurona defends the need for the Internet, a "universal right" recognised by the United Nations, to truly become everyone's heritage, regardless of the number of inhabitants living in each municipality and their age.

To this end, Eurona has launched this contest in which it encourages all generations of these villages, from children to adults, to send a video of no more than one minute where they tell in first person how high-speed Internet can change their lives, opening new economic opportunities or contributing to give greater visibility to their emblematic environment. In short, how the Internet can make their beautiful village a beautiful place.

The villagers themselves will become ambassadors of their municipalities in order to win a year of free satellite broadband Internet in public spaces. Participants can submit their videos until Monday 3 May and the winners will be announced on 17 May, coinciding with World Internet Day. From July onwards, the winners will be able to start enjoying ultra-fast Internet in the agreed public spaces, as stipulated in the competition rules.

Among the members of the Jury* supporting the initiative and who will assess the argumentation and scope of the proposals to determine the winners are institutional representatives, directors and journalists committed to the rural environment and the fight against the demographic challenge.

Eurona is ahead of the Digital Spain 2025 agenda

With this initiative, Eurona - the first operator to bring 100 Mbps satellite Internet to the whole territory - shows its ability to anticipate the objectives of the Digital Spain 2025 agenda, offering ultra-fast Internet in a viable and immediate way to the whole territory. And it does so via satellite, a technology that already matches the speed of fibre optic in rural environments, without the need for cabling or the deployment of large infrastructures.

Eurona has been successfully developing similar initiatives for years, with which it seeks to raise awareness of the possibilities that the Internet offers rural areas, which have lost half of their economic and employment weight in recent decades. According to a study by Funcas, almost half of Spain's municipalities currently have a population density of less than 12.5 inhabitants per square kilometre, the threshold set by the EU to identify territories at risk of depopulation.

According to Fernando Ojeda, CEO of Eurona, "the ultimate aim of this initiative is to close the digital divide and fight against the depopulation of rural areas, which has become a pressing problem. At Eurona, we are convinced of the role of the Internet as a catalyst and driving force for the economy and society in these areas, given the infinite possibilities it offers to rural businesses and entrepreneurs, as well as for teleworking and distance learning".

Members of the Jury