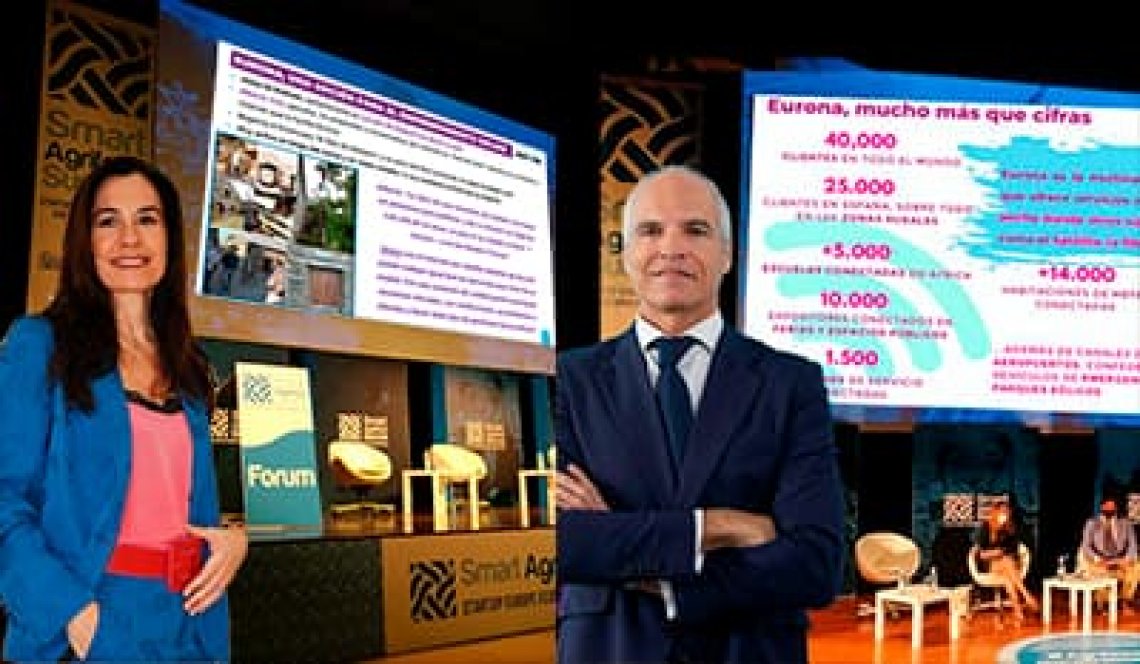 Satellite is a global technology that offers 100% coverage of the territory, even in white areas that are not reached by technologies such as fibre

Eurona, the Spanish telecommunications multinational, wanted to raise the issue of depopulation to the international level, taking it to the Startup Europe Smart Agrifood Summit held today, Friday 25 September in Malaga. There, Fernando Ojeda, Managing Director of Eurona, participated in the First European Forum to Combat Rural Depopulation, stressing the importance of the satellite as an immediate technology to combat the digital divide that still isolates and slows down the economic and social development of thousands of municipalities in our country.

At the 'Infrastructures and Technologies in Rural Areas' round table, which focused on universal access to the Internet, Eurona's CEO discussed how the satellite-based broadband Internet solution is positioning itself as an ally against depopulation, providing access to essential services such as teleworking, distance learning, online entrepreneurship and even telemedicine in rural Spain.

Together with the Marketing Director of Telefónica's large southern territory clients, Rocío Martínez Marcos; Manuel Ortigosa, General Secretary of Business, Innovation and Entrepreneurship in the Andalusian Regional Government; Pablo García, Director General of the Digital Agenda of the Regional Ministry of Economy, Science and the Digital Agenda of the Regional Government of Extremadura and Olavi Luotonen, programme officer, responsible for Smart Cities & Communities in the IoT unit of the European Commission, Fernando has insisted on the importance of the Internet as a basic need and a boost to development not only in Spain, where more than 7% of the population - around 3.2 million people - do not have a connection, but anywhere in the world.

The CEO of Eurona also pointed out the great social differences revealed by the pandemic, "the health crisis has revealed great inequalities among the population, especially in access to the Internet and new technologies", but satellite infrastructures can help to alleviate this problem of structural connectivity that we have suffered. In fact, the satellite offers coverage over 100% of the territory, that is, anyone, wherever they live, can have access to high-speed Internet, even if they live in white areas, without access to the Internet where technologies such as fibre cannot reach.

We can also talk about satellite as a complementary technology, because its flexibility and ubiquity make it the ideal solution to bring connectivity to those areas where other technologies such as fibre cannot reach.

Cristina Amor, Director of Communication and Institutional Relations at Eurona, took part in the table on good practices together with José María Ballester, Director of the Heritage and Territory Programme of the Botín Foundation; Francisco Gálvez from Rural Innovation Hub; Arturo Villar, founder and coordinator of the Global Startup Cities initiative: Young-Startup Village; Noemí Barrientos from Startup León and Lidia María Díaz, president of the Spanish Association against Depopulation, presenting some of the success stories in rural connectivity in Eurona, showing through the real experiences of the inhabitants of rural Spain how satellite technology has changed their lives in small municipalities in Castilla y León, Castilla-La Mancha, Aragón and the Valencian Community, among others.

The satellite is an immediate technology with global coverage and the capacity to provide the inhabitants of rural Spain with the same connection speed as in the cities, thus multiplying their life and business opportunities and helping to attract tourists and new inhabitants.