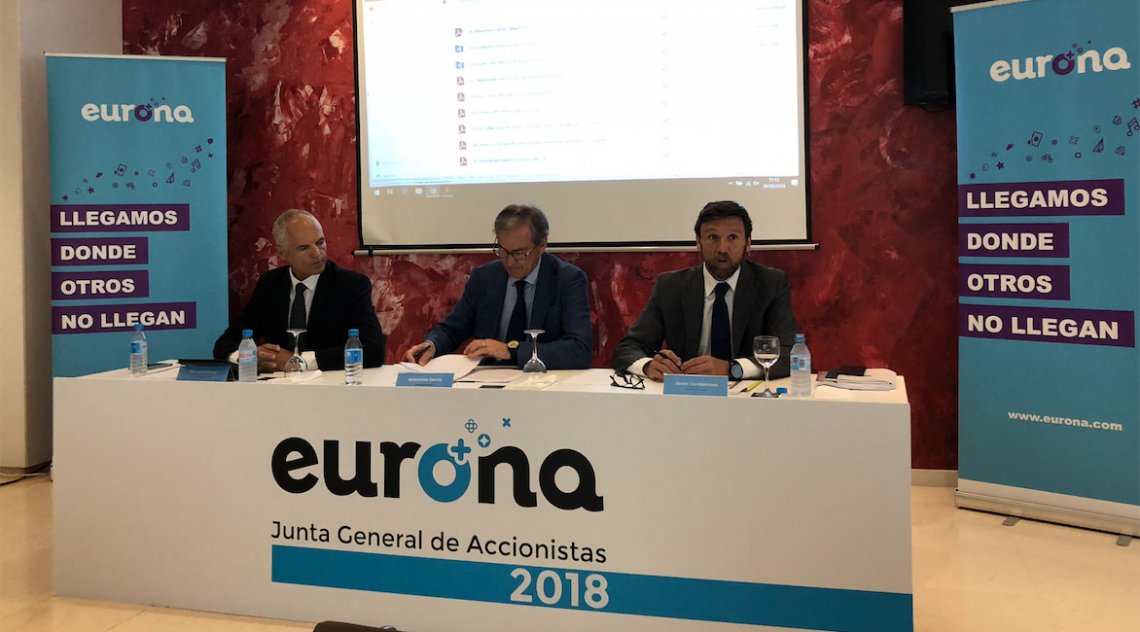 These measures, approved by 100% of the attending shareholders, provide sufficient liquidity and guarantee the sustainable growth of the group over the next four years

Madrid, July 24, 2018. The Eurona Shareholders' Meeting unanimously approved the proposal of the Board of Directors for the restructuring of the debt and the modification of the capital and corporate structure of the group, with the aim of guaranteeing growth sustainable development of the company, according to the new Business Plan 2018-2022.

This extraordinary Board, which has brought together shareholders with 53.79% of the share capital with voting rights, has approved all the items on the agenda. Thus, it has ratified the Wait-in Agreement or Lock-up Agreement, by which The debt affected by the restructuring will be subject to a principal and interest waiting period of five years from its due date.

In addition, the corporate restructuring of the group for which the satellite, Wifi and Fixed Wireless businesses will be integrated into a newly created company, -NewCo-, as well as the sale of the 5G license to the Masmóvil Group has also been approved. 30 million euros.

The CEO of Eurona, Fernando Ojeda, has pointed that the Restructuring Plan protect to the different stakeholders of The Company, including shareholders, creditors, workers, suppliers and customers: "It avoids the dilution of the current shareholders, avoids the elimination of all the creditors and offers solid guarantees to the investors who contribute new funds".

In addition, Ojeda has pointed that the Restructuring Plan provides sufficient liquidity to undertake the Business Plan 2018-2022 in a viable and sustainable manner: "Eurona is facing a new stage in its growth, in which it has been necessary to reorganize the financial liability and provide the Group with new financing. This Restructuring Plan guarantees these two aspects in order to focus on developing the company's full value creation potential ".

About the Agreement ratified today, Magnetar Capital LLC, one of the mains creditors of Eurona, has assured that a first 20 million euros injection of liquidity, of which a first provision of 4 million euros has already been made. Magnetar will acquire up to 25% of NewCo's share capital, and additionally, creditors, including Magnetar Capital LLC, will inject new resources that could reach a maximum of 30 million euros, thereby acquiring a 60% stake in NewCo , and 70% of their voting rights.

Fernando Ojeda has concluded that the Satellite business, the increasing of the contracts to the explotation of WiFi services in various airports of Latam and a high level of incomings in the business-to-consumer (B2C) and residential in Spain, will be the main levers of growing for Eurona in this new stage. "The strategic advantages will be the key for the EBIDTA  progression, we entrust that it gets the 20,2 millions euros in 2022 as the result of the improvement in thegross margin, the optimization of our structure costs and the implementation of the operational improvements".