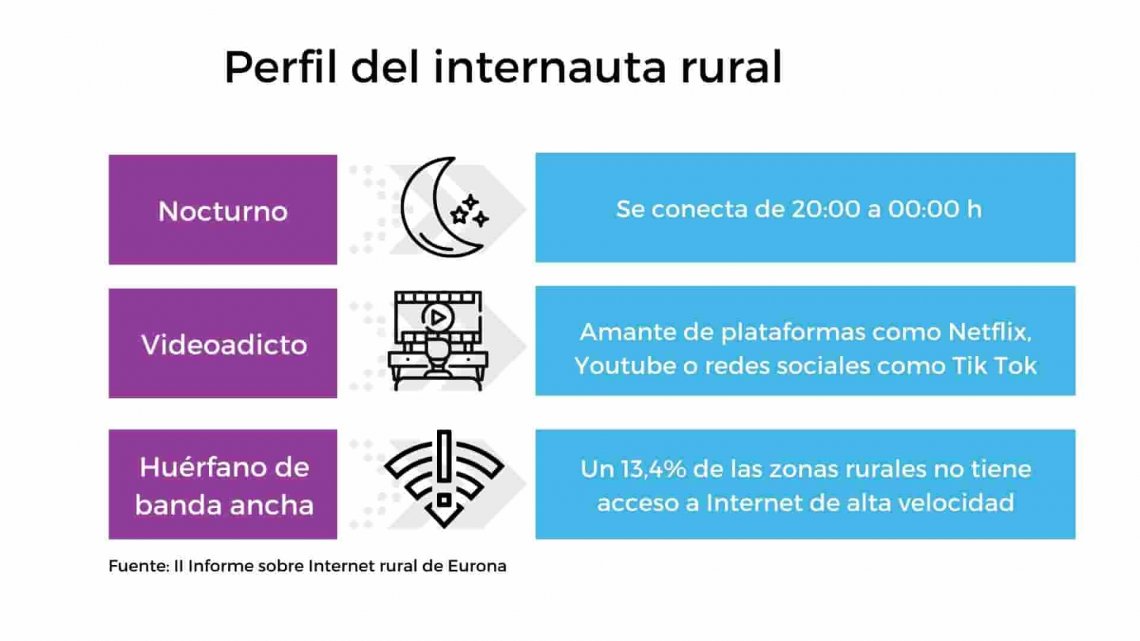 Netflix, Youtube, Tik Tok and Instagram are the applications most used by the inhabitants of rural areas

Still 1.8 million households, mostly located in rural, unpopulated or difficult terrain areas, do not have access to a minimum 2 mbps connection speed

Eurona urges that high-speed Internet connection through viable technologies such as satellite becomes more important than ever for Empty Spain, as it is an opportunity to attract new people

Nocturnal, video platform lover and fixed broadband orphan This is the profile of the rural Internet user in Spain, according to the second edition of the rural Internet report by Eurona, the Spanish telecommunications multinational that brings Internet by satellite to the villages and critical areas of 'Empty Spain'.
The company, which has detected an increase of over 60% in the number of Internet connections via satellite in the last six months in these areas, has taken an X-ray of the rural Internet user, confirming that his or her use of the Internet is similar to that of urban environments, as he or she mainly uses the network in his or her leisure time.
For this reason, although during the period of confinement he observed a greater amount of data traffic in homes during daylight hours due to teleworking and distance education, the truth is that with the return to the 'new normality', rural internet users are connected at night, specifically between 8pm and midnight.
They also spend their time on the net watching videos, films or series, as streaming video platforms such as Netflix or Youtube are, together with the social networks Instagram and Tik Tok, the most widely used applications that consume the most bandwidth in this time slot.
However, the inhabitants of these areas often have to live with connection problems and speed limitations while surfing, according to the latest report published by the Ministry of Economic Affairs and Digital Transformation.
It remains particularly striking that still 1.8 million households, equivalent to about 3 million people, mostly located in rural, unpopulated or difficult terrain areas, do not have access to a minimum 2 mbps speed connection.

More digitalisation, higher productivity and employment
Thus, in view of this gap which particularly affects 'Empty Spain' Eurona alludes to the Recovery Plan presented by the President of the Government Pedro Sánchez to recall that the digitalisation process has important effects on productivity, growth and job creation. It should be borne in mind that a 1% increase in the intensity of the country's digitalisation means a 0.14% increase in per capita GDP, according to data from the International Telecommunications Union (ITU).
In this context, high-speed Internet connection through viable technologies such as satellite becomes more important than ever for Empty Spain, as it is an opportunity to attract new inhabitants, guaranteeing such essential activities as teleworking, distance education, remote assistance or online leisure and entertainment.
According to Fernando Ojeda, CEO of Eurona, "all these data show that citizens' use of the Internet is similar in the town and in the city, which is why it is vital not to forget the rural areas and to insist that other economically viable technologies such as satellite already exist to tackle the digital divide that will especially hinder economic and social recovery in many municipalities".